This article is from the November 4, 2018 issue of The Herald Sun Digital Edition.

CHILDREN as young as 10 are being investigated by police for stalking, as cyber-bullying crosses the line into criminal conduct.

Victoria Police have been called in to investigate 500 reports of the stalking of children in the past three years, with more than 100 cases in schools.

Over the same period more than 250 youngsters aged 10-19 were investigated for stalking — and 40 of them were aged under 14.

Girls are overwhelmingly the majority of young victims, and often their tormentors are other girls.

In the last year alone, 132 girls have contacted police scared because they were being harassed or followed.

In one commonplace case last week, a primary schoolgirl sent a fellow pupil a text message which read: “Go die in a hole” .

But experts say the problem is even more rampant than police statistics indicate because many cases go unreported by teachers or parents who don’t realise the extent of the harassment or that it is a crime.

Some threats are hidden from adults as kids receive them on apps such as Snapchat, which automatically deletes messages. And cyber safety expert Susan McLean said victims and families were often “fobbed off” by untrained police who didn’t take complaints seriously.

“If laws are not being applied properly then there is no deterrent,” Ms McLean said.

Repeated bullying — including texting or commenting online — has been considered criminal stalking for almost a decade, but authorities still battle with how to respond.

Ms McLean said children were being let down by authorities. “There has been no specific training given to frontline Victorian police in the 10 years since I’ve left the force — it’s appalling,” she said. “Most don’t even know what apps the kids are using.” She has backed calls by the state Opposition to reintroduce the Police in Schools program.

Meanwhile, a new Melbourne based organisation, the Stop Stalking Now foundation, will push for more anti-stalking education in schools. It comes as victims gathered at Parliament House recently for the launch of the book Stalked by foundation founder and victim Rachel Cassidy.

Mental health experts are determined to raise awareness to save lives. Psychologist Gary Rubin is working with the foundation on a new virtual reality program about stalking he hopes to take into schools. He said counsellors had seen a drastic rise in the number of young children needing help for anxiety because of cyber crime.

“The mind becomes torn between paranoia and reality,” Mr Rubin said. “You can see people’s statuses, location … it’s relentless and can be debilitating.”

Victoria Police spokeswoman Alex Day said officers were trained to deal with cybercrime from recruitment. “This includes updated information on new and emerging trends,” she said.

A state government spokeswoman said it funded the eSmart cybersafety program in all Victorian schools. 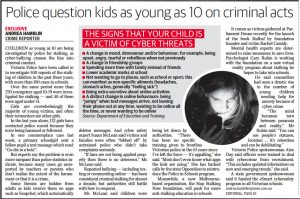 This article is from the November 4, 2018 issue of The Herald Sun Digital Edition.